Dear Mr Apple,
I've found what appears to be a minor bug in El Cap's spelling autocorrection mechanism, however your feedback mechanism doesn't allow for enough characters to describe it. Here it is instead.

When the text insertion cursor is placed in a string of letters at a position in the string such that the letters to the left of the cursor constitute what spellcheck considers to be a misspelled but correctable word, it will not give the user warning. However, if a space is then inserted, the correction will be made, unannounced.

Here is a common use case in which this behavior represents a bug. Suppose the user wants to modify the following phrase:

Two possible methods for doing that are as follows:

The lack of visual warning in Method #2 step 4 is a bug.

Fellow users, if the above bothers you as it does me, turning off autocorrection completely can be done in System Preferences->Keyboard->Text by unchecking the Correct spelling automatically box. 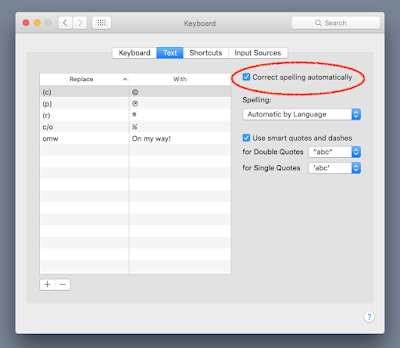 To turn off autocorrection more selectively, for selected applications,  see here.
--
Posted by Tommy at 10:13 AM